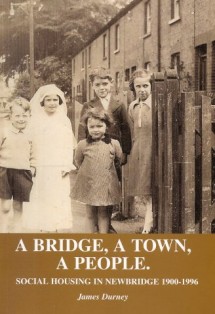 Newbridge is a relatively new town, having sprung up around the British Army barracks built between 1813 and 1819. At the dawn of the twentieth century many inhabitants of the town lived in privately-owned, poorly built cottages, with no running water or toilets.

The provision of social housing in Newbridge by the Town Commission, Board of Health and Kildare County Council improved the living conditions of the people of Newbridge and brought it from a sleepy market town to the thriving metropolis it is today. The goal of the local authorities to eradicate substandard dwellings and provide alternative housing to the working classes of the town was achieved in a remarkable short time.

In 1900 the population of Newbridge was around 2,900. Most of the population lived in substandard, which comprised one room, a kitchen and an outside toilet. Some of these houses accommodated up to ten persons. In 1902 the Town Commission built the first social houses, Rowan Terrace. In the following years, through the Troubles, World Wars, and economic turmoil, the local authorities did their utmost to improve the situation of the working classes and rid the town of its teeming side streets once and for all.

This book is peopled with the rich characters of Newbridge – Pom Moran, Pop White and Yonkie McCormack – and prominent families – Dempseys, Duanes, Durneys, Murphys and O’Briens. A Bridge, A Town, A People is a lively tale of their long march from the crumbling cottages of the back streets and lanes to the properly planned and pristine new schemes of Piercetown, Pairc Mhuire, Highfield and Lakeside.