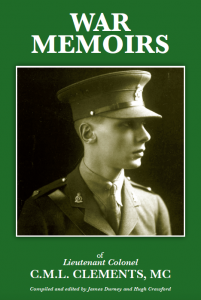 Charles Clements of Killadoon, Celbridge, joined the British army as a young subaltern. After service in India with the 4th Queen’s Own Hussars, he returned to England as storm clouds gathered over Europe. He served in France during the ‘Phoney War,’ which ended with the German invasion of France and the Low Countries. Charles accompanied the 4th Hussars to North Africa and, subsequently, to Greece in 1941 to thwart an Axis invasion. He was captured, along with the bulk of his regiment, in Greece and spent the next four years as a prisoner-of-war in Germany. Liberated in April 1945, Charles Clements returned to Britain to an appointment as commandant of Bridgend POW Camp, where he was the guardian of many of the commanders of the German armed forces. Throughout his time in the British army Charles maintained a diary, and in later years began to compile his writings for publication. The authors have used his diary, memoirs, letters and photographs to compile a highly readable account of one man’s personal struggle through combat and captivity in World War II.