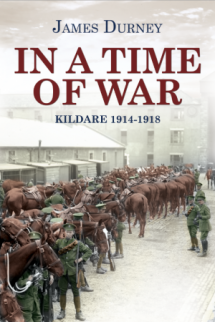 In this fascinating study based on original research, James Durney reveals the true extent of the military, political, social and economic impact of the Great War on Kildare, the ‘Shortgrass County’. This book demonstrates that for the local community in Kildare, the war was remote only in geographic terms; its ravages being painfully felt in every aspect of Kildare life – food prices, the farming economy, Belgian refugees, the role of women, soldier suicide and shell-shock.

In 1914 Kildare was a garrison county home to Kildare Barracks, the Curragh Camp, and the Royal Dublin Fusiliers Depot in Naas which ensured that Kildare’s recruitment exceeded the national average. James Durney expertly recounts Kildare’s unique experience of a war which had raged out of control. He details the inept handling of recruitment and the later conscription crisis and tells the stark human story of Kildare men leaving their towns and villages, humble cottages and Big Houses for the carnage of the Western Front and Gallipoli. Over 700 never returned. This is the story of one Irish county during that dramatic time.