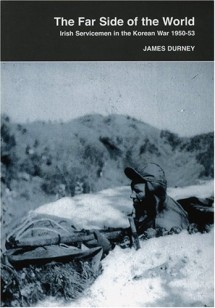 The Far Side of the World. Irish servicemen in the Korean War 1950-53

On June 25 1950 the North Korean People’s Army launched a surprise attack across the border between communist North Korea and the Republic of South Korea. Within days American ground troops were committed to Korea and with them many Irishmen, recent emigrants to the US. Several weeks later more Irishmen arrived as Britain committed a brigade to the UN cause.

Hundreds of Irishmen from the Royal Ulster Rifles and the Irish Hussars arrived in Pusan preparing for the re-unification of Korea by force of arms. This UN mandate was interrupted by the intervention of China and the Korean War dragged on for another three years resulting in millions of casualties. This is the first book to access the involvement of Irish soldiers in the armed forces of America, Britain and Australia or as soldiers of Christ.

This is the story of the Irish in Korea, told in many author interviews, personal narratives, newspaper accounts, and letters. Includes thirty-two photos, map and list of all soldiers and civilians from Ireland killed in the conflict

In a riveting style… the story of the many Irish soldiers who traveled to the far side of the world, to a country none of them knew, to fight and die in one of the most deadly conflicts in modern time
Londonderry Sentinel, 2006