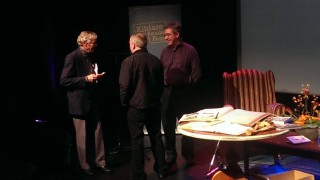 A successful Readers’ Festival in the Riverbank Arts Centre Newbridge

James Durney, author of the recently published The War of Independence in Kildare, was a guest speaker at the 2013 Kildare Readers Festival, James hosted an illustratred discussion with participants to help compile a list of relatives who may have participated in Co. Kildare’s decade of revolution, 1913-1923, the 1913 Lockout, The 1916 Rising or the War of Independence. The aim of this project is to publish in 2016, a biographical account of all Kildare participants in this revolutionary period to coincide with the anniversary of the 1916 Rising.

Have a read of the Leinster Leader Report